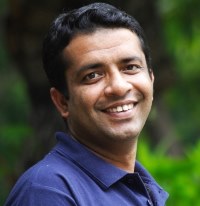 Popularly known as the Clothing Man and recipient of 2015 Ramon Magsaysay Award, Anshu Gupta  has studied Mass communication and  has a masters in Economics. Starting as a freelance journalist, Anshu left a corporate job in 1998 and founded Goonj with a mission to make clothing a matter of concern and to bring it among the list of subjects to work on,  for the development sector.

Under his leadership Goonj has taken the menacing growth of urban waste and used it efficiently as a tool to trigger large scale rural development work.By creating a barter between two new currencies; labor of the beneficiaries and old material of cities, Anshu has built the genesis of a parallel economy which is not cash based but trash based.

Anshu is an Ashoka and Schwab Fellow apart from being a member of the Humanitarian Crisis Council of the World Economic Forum and has been listed by the Forbes magazine as one of India’s most powerful rural entrepreneurs.

Anshu brings to the table an instinctive empathy and connect with people by dignifying the act of giving. In the macro picture Anshu has identified some basic needs outside the radar screen of the development sector and the civil society, that too by structuring imaginative solutions using urban waste.

An entrepreneur at heart, avid traveler, photographer and a journalist by training, ​Anshu often pens prose and poetry, giving vent to his feelings and opinions on the issues that bother him about the world around him.