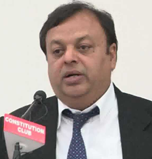 Shri Pankaj Jain joined IAS In 1978 after a brief stint in the Indian railways. He retired as Secretary, Ministry of Drinking Water & Sanitation, Govt. of India in September 2014.

He has studied at the most prestigious universities/ institutions in India and overseas including St. Stephens College, Delhi and I.S.S., The Hague(Netherlands). His academic record has always been outstanding securing distinction in school well as in college.

He has worked at senior positions both in the state as well as in the central govt. He has specialized in infrastructure, ports, shipping and roads, urban development, urban reforms and water & sanitation. He has travelled widely and participated in various national and International conferences/seminars and presented papers on important topics in India and abroad. During his long stint in the Govt. of India and State Govt., he has held various important positions such as: CMD HUDCO, Govt. of India, Principal Secretary and CEO, Economic Reconstruction Agency, J&K where he dealt with water supply, drainage & sewerage, waste management, power projects,etc.

As Secretary, Drinking Water & Sanitation he handled India’s rural water and sanitation programme for 17 lac habitations. Fully covered habitations with 40 lpcd safe water improved to 70%, with the balance habitations partially covered with less than 40 lpcd, whereas about 70,000 habitations still remain with water quality problems. The MDG goal has been achieved in water; whereas in sanitation, coverage improved to 47% of households. R.O. plants were set up in a number of rural areas in the country. He took new initiatives like: rolling out Swachh Bharat Mission (Gramin), proposing the now set up Swachh Bharat Kosh and a Swachh Bharat cess on taxes; issuing detailed sector specific CSR guidelines for water & sanitation; empanelling leading NGOs for undertaking CSR projects; reviewing water & sanitation facilities in schools, etc.